Blame it on Fake News (Again)? Unpacking Media's Onus of Safety in the U.S.

Blame It on Fake News (Again)?

Fake News. It’s a phrase we’re all so familiar with that continues to shatter global headlines, given the polarizing political climate we’ve experienced over the last several years.

Current-day, in the aftermath of multiple back-to-back shootings in El Paso and Dayton that stunned the nation, Fake News, as President Trump describes it, falls on the media’s responsibility to report news that is honest, unbiased and fair, and how it has contributed immensely to stir anger and rage among Americans. 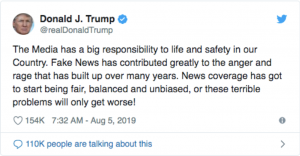 While a recent Wall Street Journal/NBC poll shows almost half of Americans disapprove of President Trump’s response, these findings reveal just how concerned many are of their personal safety, so much so that a new agenda is being pushed in favor of many majorities supporting the U.S. Congress move to heighten background checks for all firearm purchases.

With the current news landscape rife with many people probing what’s real or what’s fake, media professionals have tremendous influence – especially in a political climate where tensions are high. For PR professionals, the question remains, how do we uphold to the responsibility of staying ethical, biased and honest amid a news environment filled with bias and rumors?

Adopt a hyper-cautious mindset. With the rapid spread of fake news, the public’s trust is at an all-time low. This notion adds more pressure on PR professionals to be extremely thoughtful and thorough when formulating stories that will reach audiences through journalists and reporters. In the pitching process, it’s important for PR professionals to rely on fact-checking to tell the most accurate story. Many industry professionals turn to sources like snopes and factcheck.org for discerning what’s fact versus fiction.

Use social media as a resource, not as a means of getting all of your information. I’ll admit – Twitter or Instagram are usually the first channels I tend to get late-breaking news developments. It also turns out that fake news is thriving thanks to those who use social media frequently.

According to a recent Pew Research study, almost 60 percent of adults in the US who prefer to get their news from social media are more likely to share fake news before those who source their news via more traditional methods, ie. online news outlets or television. While we have learned to rely on social media to stay up-to-date and current, PR professionals mustn’t use it as a crutch. Always do more digging, and make sure the news you’ve found ties back to a reputable, trusted source.

Always remain authentic. In the era of alternative facts, it’s important for PR professionals to represent their clients’ brand in the truest and most transparent fashion. Articulating an original and solid voice that holds the brand’s core values will be heard loud and clear and will also garner the right attention – especially in midst of a crisis.

With the stain of fake news wearing off no time soon, we as PR professionals must equip ourselves to step up as a true ally to the media. This oftentimes requires us to take a step back, reassess our surroundings and mine our resources in the pursuit to fight against a widening sea of misinformation. It’s not just the responsibility of the media to report what’s fair, honest and unbiased; as those who stand behind-the-scenes of the ‘dissemination of news’ battlefield, it’s also ours.