Is the News Media In Trouble? Reuters Thinks So. Our Take on Their Report.

Reuters recently released its digital news report surveying over 75,000 people in 38 markets on current challenges facing the media business today. As a former news producer (who, my past colleagues would say, crossed over to the “other side”), reports such as this are advantageous from a PR perspective. I’ve gathered three key takeaways from their findings:

Trust in The Media is Still an Issue

The Report Says: Across all countries, the average level of trust in the news, in general, is down 2 percentage points (from 44% to 42%) and less than half of those surveyed (49%) agree they have lost trust in the media overall.

My Take:  I couldn’t agree more. The way we consume media has drastically shifted, thanks in part to new-age technology. As digital media usage advances, we are constantly inundated with reports of questionable news sources, internet trolls and content with malicious intent. This reinforces the narrative that trust in news outlets is falling across the world. As PR professionals, we can change this discourse by being transparent and accurate when communicating with the news media. We play an instrumental role as “middlemen” when supporting our clients and interfacing with the media on their behalf.

Subscription Fatigue Is Setting In

The Report Says: Despite efforts of the news industry, we find only a small increase in the numbers paying for any online news – whether by subscription, membership, or donation-based. Growth is limited to a handful of countries mainly in the Nordic region (Norway 34%, Sweden 27%), while the percentage of those paying in the US (16%) remains stable after a big jump in 2017.

My Take: The ability to access news by way of the mobile devices has completely revolutionized the delivery of information, while simultaneously destroying business models that have upheld news organizations for decades. It’s truly a sign of the times. Currently, large news organizations such as The New York Times, The Washington Post and The Wall Street Journal are allowing users to access two to three free articles unless a subscription is purchased. This happening primarily because advertising sales have dwindled with traditional news organizations who are looking for a new stream of revenue in subscriptions. However, this change begs the question; will people actually continue to pay for news? I wonder if this news subscription model will last. Even amongst those who do choose to subscribe,  “subscription fatigue” is becoming a thing and quite frankly, many people would rather pay for movie or music subscriptions than news.

From a PR POV, gated content can become a hassle for PR professionals looking to amplify client news. I’ve had clients gain coverage in local and major publications with a paywall thus preventing them from sharing a complete article with their audience and colleagues. Of course, we’ve maneuvered our way around the wall of subscriptions, however, it’s a model I believe will soon become a thing of the past.

The Younger Generation Has the Upper Hand

The Report Says: We look at the news consumption of younger generations – a group that is of great interest to news publishers around the world, but also one they are finding increasingly hard to reach. Young news users also rely on news aggregators like Apple News, Flipboard, and Upday, particularly when they use news in ‘time filler’ moments or want to get a quick update about what’s happening during intercepted moments (e.g. via a news alert). Aggregators are increasingly prominent on smartphones, where headline lists can be accessed by swiping left or right from the smartphone home screen. 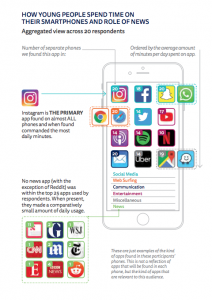 My Take: This finding tells us what we already know. More than half of those surveyed (55%) access news through digital news platforms and news aggregators(or search engines) and most importantly, social media. Generation Z, for example, is considered the first “digitally native generation”, evident in their media consumption with digital-first publications, such as Vice, Refinery 29 and BuzzFeed. This groups “digital diet” favors platforms that can curate and rank articles using algorithms rather than editors. Their habits and interest are shaping the way news will be consumed for generations to come. As someone who consistently monitors for news and trends in my client’s industry, I can attest to the fact that receiving information from multiple outlets on one platform, as opposed to searching multiple news outlets, saves time providing me with the most up-to-date articles and insights, when I need it most. As PR professionals, this is not only imperative but allows us to position our clients and their business appropriately based on what’s trending with the media.

As communicators, I view these findings to be both challenging and opportunistic as we have the ability to educate ourselves and our clients on the shift happening in news media. With this information, we are better equipped to provide expert counsel by preparing them for the changes that lie ahead.

If you are interested in reading the full report you can view the results, here.